drat! it seems that the Elliptical machine's calorie counter is lying!

I had all along felt that the 500 cal burnt over 2700 steps is overstated, especially since the counter had no relation with the resistance level and my weight. More like a counter based on the number of steps.

and it turns out that i am correct. Based on the "calories burnt per exercise" calculators here, I am burning just 60% of the calories burnt as reported by the counter at best.

sheesh. so demoralizing, and i got to stop eating like i deserve to because of the exercises immediately. ARGH!

and i got to start exercising more and longer! good grief, no need to sleep liao...

not bad considering that i really didnt want to do it, just too tired. i occupied myself with some housework from 11 to 1130 and finally decided to just do it.

E suggested dining out for the night, and we went to Prego

1. wine
some house white for me (not the run of the mill, but not great so i didnt bother remembering the name), and merlot for E

6. coffee/ earl grey
tea for me, coffee for E

The evening was nice and cozy, but we took pains to ignore the Hyundai Elephant in the resturant....

Have done some research that the longest time took for a woman to complete the VM is about 27min. I'm setting a modest target of 25min. :o

People are often unreasonable, illogical, and self-centred;
Forgive them anyway.

If you are kind, people may accuse you of selfish, ulterior motives;
Be kind anyway.

If you are successful, you will win some false friends and some true enemies;
Succeed anyway.

What you spend years building, someone could destroy overnight;
Build anyway.

If you find serenity and happiness, they may be jealous;
Be happy anyway.

The good you do today, people will often forget tomorrow;
Do good anyway.

You see, in the final analysis, it is between you and GOD.

It was never between you and them anyway.


I came across this quote yesterday and it is sending a sea of ripples in my thinking.

I used to wonder how best to bring up my kids, do i teach them to be kind, be courteous, do good etc and risk having them be taken advantage on? or I teach them to take care of themselves first, which is raising children of a character that I'll loathe at the end of the day.

I have a clearer path now.

Had wanted to run on Saturday but family commitments dictate that I postpone it... but that's alright, it takes a village to support a runner with small kiddies. I'll do my part and not run if that's required from me. :)

But at least I managed to run on Sunday.
Couldnt join AHM, and at least i ran on the same day :D

i bounded out of the flat as usual while trying to keep an idiotic grin from my face...

the ankle did a funny thing just in the middle of my warm up, something in the arch area sorta creaked and unhinged with a cold flash. I gingerly ran a few more steps and decided that i can continue. Averaged 7.5min/km pace for 4km while i did sorta tempo runs, easy 200m, fastish 200m and 100m sprint. my heart was racing like mad from the unfamiliar sprints. oh well, you gotta start somewhere, and hope to get better.

after the walk back to the flat, i decided that now is as good a time to start training for my Vertical Marathon (VM2006) , so i walked up the 10 storeys to the flat, no hands. the first 6 storeys were very easy, but my breath started laboring from 7th and i've had enough at 10th tho the flat goes up to 14th. there's always a next time.

The arch area is a little sore after the session, a little worried now. Gonna order the patt-stap PSC tomorrow for my ankle before it gets worst again.

yup, another hour. i'm doing so well i was tempted to do the 6km in this Sunday's Army Half Marathon. but nah... the ankle's bothering me just a little. better remember to take my glucosamine.

I'll pace myself and do maybe a 5km in the Ghim Moh canal this weekend.

Managed to start earlier, but thats only becos the kids spent the nite at their grands, i started immediately after the housework was done with no rest in between, and overly guilty from the Crayfish laksa with cockles I had for dinner with Leng.

Suvarnabhumi Airport (pronounced as Su-Va-Nak-Phom to my untrained ears) will replace the old and overloaded Don Muang Bangkok International Airport on 28th September 2006 for both international and domestic flights.

Managed a sneak peak on 17-8 in relation to work with a tour led by 2 senior airport authority officiers.

outside view of airport

inside view of airport

view from inside of airport at gardens outside/ fake birds!

It has interested architecture - a H-shaped Terminal, Petals like external walls, glass and steel works, gardens outside (out of bounds)

There are great sign boards, clearly labelled and brightly lit, placed every where at every strategic junction where you need to make a decision to turn left, right, up or down.

Where ever you need to go, the arrival halls, departure halls, immigration, belts, boarding gates, shops, restuarants, toilets, smoking rooms, airport lounges, even to the prayer rooms! Unlike those obscure little ones with vague arrows in the airport immediately up north of ours.

Arrival Hall is much bigger and longer than the Don Muang Airport, hopefully with much better pp traffic control too.

Departure Hall is brightly lit and has a cheerfulness to it. Workers were doing trial run of luggage handling, printing boarding pass, making announcements and what-nots on the day we were there. Strangely there werent any of the tension that one might expect from such an exercise, seeing that they were just about a month away from the official opening.


Especially when there is still so much construction left to do...

in the hall/ on the ceiling/ on the roof

The place was still very unfinished in many areas, lots of construction going on, unconcealed ceiling, exposed wire works, decorations, carpetting etc. To my unlearned eye, it seems that there were easily another 20% ~ 30% to go before the airport finish. There were lots of workers milling about, but none looked like they were in any real hurry, often stopping and resting. I guess this is the sahbai (Thai for relax, dont worry) spirit at work. The airport had already postponed its opening from end 2005 to June 2006 and now end September 2006, and I wonder if they can make it this time.

Good thing they did get some of the major art installations in, such as this sculpture depicting the "Scene of the Churning of the Milk Ocean". Unfortunately despite of the english translation of the meaning of the scene, I'm not the wiser as to its meaning or its significance.

The airport is HUGE, and luckily where there are heavy traffic to far flung destinations within the airport, there are long travellators. Unfortunately, they werent working yet the day we were there.

What would i give to rest my feet in an overstuffed sofa and a beer. But these uncomfortable bare metal chairs were all we got.

gosh, i need a drink, but no... i had a plane to catch and it was straight from the new BKK airport to the old BKK airport and to Changi airport.

So far I've learnt that:

Length of rope should be : when standing in middle of rope, the ends should come to the armpit.

Form : knees slightly bend, land on balls of foot, shoulders slightly back, back mostly straight, stomach in, head looking ahead

Calories burnt : jumping rope at about 130 revolutions/min about similar to running at 6 miles per hour or cycling 12 miles per hour. i.e. 10 minutes of rope skipping (at 130 rev/min) is equivalent to a one-mile run.

Sets: For beginners, it will be easier to alternate 1min skipping with 1 min marching on the spot up to total of 10min, lengthening total time, and/or time skipping over time marching as skill and stamina improves.

Footwear : shoes for running (me just go with thick socks on carpet)

Floor : Those with slight give such as hardwood floor, carpet will take off pressure from joints.

will find out more about tricks/ skills when i get better, i'll just concentrate on doing 10min (1min alts) first.

73 storeys high, unrivalled view from the top, and a finisher's medal

so i was representing my company in signing the MOU, nothing biggie there, but Miss Thailand 2003 was the MC for the event. 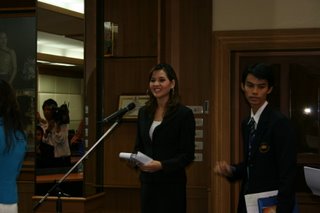 and the press conference after the event was quite a sight. Never had so many cameras pointed in my face ever before.

Right, i said that i'll bring my skipping rope on trips, i did and i skipped.

the plan was to do 12 sets of 50 continuous jumps, with rest in between each set.

but who'd had known that it was so difficult? my first few tries were rusty, the rope flinging every which way, tripping over them, and panting like mad. i was jumping too high, too low, my knees were bending too much etc. there were quite a few aborted sets where i had to start from count 1...

but it was satisfying, kinda bringing me back to girlhood games.

in the end, i completed 11 sets of 50 in 50min, taking long rest in between sets. then pushups, situps and stretches.

gotta find out what is the proper sets for skipping. is 50 too little per set? ;)

Not sure what event is in town, but there were no normal rooms available in the hotel that we frequent, so i had to put up with the suite. it was huge! the size of a 2 bedroom flat in Singapore easily.

There was the living area with proper barcounter set up, sofa and coffee table, writing table, TV wiht video player and guest toilet , 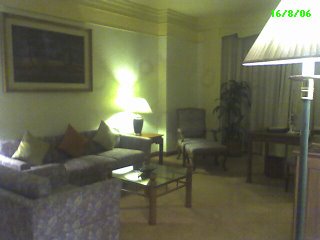 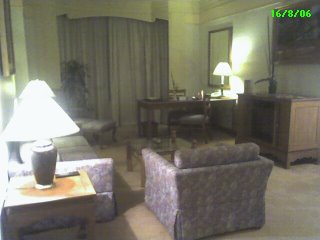 the bed room with sofa and TV,

and a master toilet complete with walk-in wardrobe. 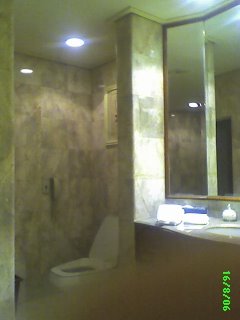 more than enough to do my rope skipping exercises.