i hope i'll stop at 4 this time

i first blogged about the Visual Bookshelf in early Dec 07

and they've improved the application by leaps and bounds since

almost all the items in my (silent) wish list were granted:

my only grouse is that they've gone to page view of only 5 books per page when viewing bookshelf, instead of 10 books per page or (almost) unlimited scroll

and there are still no chinese books and locally published books

but i'm still a huge fan.

Did i say it was a slow bleeding death?

I spoke too soon

Labels: to Despair, to Invest

Had upgrading from IE6 to IE7 when it became available a while back, while I enjoyed the tabs but but hated the lag and general hogging of system resources, and worst of all the error message that pops up to say 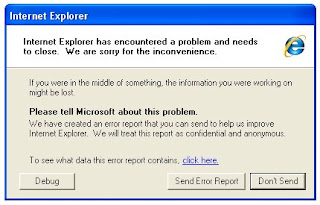 even when I chose to close IE when done with it.

and recently it has been shutting down as and when, especially when I have my poems account opened. Very inconvenient to say the least.

So I've decided to move and installed

Imported the IE stuff and installed Java and Flashplayer etc, but loading and installing the plugins were mostly painless.

"Only" thing left to check out at the addins and figure out how to open a new tab without having going to the menu.

The stock market has been crashing for well over a week now.

Whilst it is a drawn out daily slow retreat instead of one major plunge, nobody is harboring any hopes of Asia being spared the fall out from the sub-prime crisis which started in US and is spreading to the rest of the world.

I pray that China doesn't give us anymore unsettling news like it is slowing down (they are not allowed to! This is Olympics year for goodness sakes, no negative news allowed with countdown at 199 days now), even as we understand that its economy has been overstated.

My portfolio has already lost about 15% of its value (though thankfully I'm in a net gain position since some counters I've held for years when they were quite cheap, and I've been receiving regular dividends on them)

Nonetheless, unfortunately I've plunked in a total of some $12k in late Dec and Jan and am sitting on paper losses of $2.5k at the moment. *pout*

The golden rule of investing is never play with what you can't afford.

So I'm grateful that those are money that I could afford not to use at the moment, so those are positions that I do not have to liquidate yet.

On the bright side, I've received my annual statement from CDP and it says that I have received about S$1k in dividend in 07.

So that's some comfort.

Let's see if more blue chips continue to drop like flies and check out what to buy.

Did mostly the helicoptor stuff to supervise that everything was on track, and none of the menual stuff like getting the conference file out. But micro-management issues that may have political importance like seating arrangement, lucky draw price listing, programme etc still had to be done by myself.

Part of the job was of course the strategic meetings with the attendees to hammer down FY08 plans. An even heavier than usual burden since Big Boss showed little interest this year to even show face at these meetings: leaving me and the Sales Manager to handle everything from budget to travel plan. Thankfully we work well together, taking turns to play good cop/ bad cop and rephrasing each other's comments to either sting harder or go down easier.

What drained me the most was the constant eye on EVERYTHING to make sure EVERYTHING runs like clockworks, usually being the first few to arrive and definitely the last to leave.

Had to host dinner and entertainment for some of the attendees too, but luckily by sheer fortune (or calculated scheming) I didnt have a drink for most nights, unlike precious years where I had to, a lot.

But the truth is, it gets really REALLY boring when you dont drink and stay sober when everybody else is getting plastered. But then again, my job is not to have fun...

The interesting turn around for the company dinner came when the lucky draw was conducted. Ranging from food hamper (which had canned abalone and liquor in them, dont pray pray hor) to the top price of $5k travel voucher. I came in 9th with a Creative Zen Stone + $300 shopping vouchers.

Then an even more interesting proposition came when some big sponsors stepped up with $10k of super grand prize. Big Boss decided to have some fun by setting the rules and then changing them, several times, to get people (overly and unnecessarily) excited of the possibility of being handed $10k in cold hard cash for no rhym and reason. Mad scrambling ensued. Broken props. Sudden moment of clarity and seriousness in a night of high drunken revelry.

Me? I stayed aside to watch the proceedings... I mean, i will never win a karaoke KO, plus i knew the Big Boss so well that i was sure the rules would change at least once, and it is "only" S$10k

In the end, through some unfathamable logic and proceedings, I came away with 2 pieces of S$1000 notes.

Me? I smiled the smiles i was supposed to but no real joy.

S$2k not small change in any way.

But i didnt earn it.

Maybe i am slightly depressed for having sustained more losses than this since the stocks started dropping like flies.

have been living in zombie nation for the last few months, worst since returning from Korea.

i
- wake up tired, no matter how many hours of sleep : 3/6/9/12
- sometimes need to sleep again almost immediately upon waking up
- have nap attacks
- have complete system shut-down where i simply cant function anymore
- can fall asleep immediately upon head hitting pillow
- worry about blinking becoming a moment of shut-eye, especially when driving

it is affecting me enough to have me talking to a GP friend.

was told to get a blood test done, to rule out other stuff such as iron deficiency, being anaemic, hormone imbalances or other diseases such as diabetes and various cancers, and even depression.

when all else is negative, the remaining conclusion can only be

in the mean time

for a quick fix : multivatimins + ginseng for a month

i hope it works

Even have a friend whom we superpoke bad stuff each other with just because the mean ones so much more wicked and funny (seriously, compare "roundhouse kick" and "hug", *rolleyes*), none of it with "real" malicious intent of course ;)

So there is an element of I'm skanking you "just for the fun" and for me to relieve stress.

And now the dilemma...

not of the keeping count "i've been superpoke x times, so i must superpoke BACK x times" or "mean beget mean" or "do i superpoke random people to get to the next level" or even "do i continue to superpoke friends who never superpoke me" varieties.

what if there is somebody i really want to use a mean superpoke on and i really mean it, so should I superpoke or not?

and if i've nice superpoke someone and i'm now regretting it, can i cancel it with a mean superpoke?