(Needless to say but this is NOT a paid advertorial. haha.)

I was skeptical but since it didnt cost an arm and a leg at $75 for 30ml (compared to 6-12 times for botox + filler), I bought one to try 3.5 weeks ago (when i was not that desperately poor yet)

Twice a day application on the 3 long and deep horizontal groves on my neck which had bothered me since school days. Imagine me wearing 3 donut rings and you wont be far from the actual image.

Just a week later, the middle line has the edges on both sides of neck lightened, and the others not as deep.

1.5 weeks later, the top line has lifted to show itself to be 2 lines instead of 1 deep line.

now, at 3.5 weeks later and 1/3 tube down, the bottom line has almost disappeared; the sides of the middle line has disappeared further, leaving only a faint line in the center; the top (2 in 1) line has decreased in depth overall.

The miraculous thing is that it is not "cosmetic" only, i.e. such as makeup where the coverage disappears when you wash it off. After showering, the lines are still away! The effect is as if I have stretched my skin without using my fingers. The line is simply not there!

Even better, the effect lasts. I had gone for a 3 days work trip and had forgotten to pack it for the travel. The lines didnt return in the mean time. Upon my return and 1st 2 application, the effect simply continued to improve.

You gotta buy it. For yourself, your mom, your wife, your mom-in-law, your elder sister.

It works. I didnt believe it, but it does. 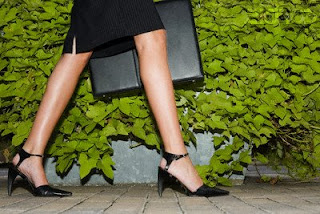 Sent my car for 40,000km servicing this morning, and tried to hail a cab back to office.

Started walking towards the main road. Missed a cab as I was walking behind a parked trailer. ARGH.

Crossed the junction, no cab.

Started walking in the direction of my office. Still no cab.

Next junction, a cab turned but it was already hired.

Kept walking and I was just 1 junction away from my office. Decided to walk to the office.

And I reached my office. 2.1km away according to Google maps, and I saved maybe $5 on cab fare.

Time to collect my car. I decided to save money (since I'm seriously broke now) and not call a cab, but to try my luck by walking out to hail one.

Walked along the road, saw one cab coming towards me with somebody in it. Perhaps it is my lucky day? I walked a little more to the further junction (to save money, like 10cents...) thinking it "had to" reverse and come out this way... But lo and behold, it was GONE!

Walked out to the main road. No cab.

Crossed the road. Still nothing. Only lots of lorries and FTs on bicycles zooming by, and i'd have to be injured AND crazy to hitch-hike on one...

Kept walking towards the service center. Still no cab.

Yes, 15 min and 2.1km later, I had walked back to the service center from my office.


I'm not sure whether to be glad of the $10 savings, be perplexed over the gods of healthy lifestyle that had chosen me, be thankful for the cloudy weather during the walks, or plain forget about today.

Had watched Chef's Special and Brokeback Mountain back-to-back during a recent trip, and now the song "I kissed a Girl" by Kate Perry is stuck in my head (though the song was not featured anywhere in the movies).

I wonder if there's supposed to be meaning in these?

was telling my nanny that i was going on another work trip yet again, and she shook her head.

I was a little sheepish, cos actually I take aeroplane MORE than MRT. 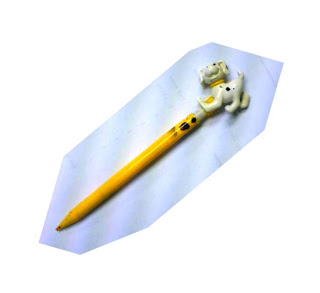 It broke today, the plastic outer/ metal inner tip actually chipped off as I was writing non too violently.

Maybe it is the age. 13-14 years since I received it as a gift. Absolutely incompatible with me as far image goes, but it brought a smile whenever I used it, precisely because it was so unlike me.

Thanks for the memories.

So the Dow had fallen on hard times (crashed is too drastic a word to use at this time) over the sub-prime credit crisis and markets all over panicked and fell to 3 year lows, wiping out billion, trillions of dollars worth in market capitalisation in sustained plunges over the last few months.

Some markets (such as Indonesia) even saw it fit to suspend trading until calm (or as least less panic) prevailed when they fell more than 10% in less than a day's trading.

My portfolio suffered mid-5 digits losses too, not helped by some last minute gambling on contra basis when I bet that the bailout plan will strengthen the market. HAHAhaha*sniff*

Had to beg, borrow and steal to eat them up and hold on to hope, instead of realising the losses.

Love is when you tell your hubby what you've done, and he was not only ok with borrowing from the family account, he was actually willing to take losses via the family account too. Sigh. I do hope I am deserving of such trust and understanding, which of course I AM. DUH. But lets not take it for granted.

So I trooped down to the brokers office to cough out the dole for the stocks, and i passed by Donut Factory on the way back.

Labels: to Invest, to Shop Buy

Thanks to Karen and Jenn Loong who hosted lunch and swim (for kids and Daddy cos the Moms didnt want to get wet) and tea over the Hari Raya Holiday (which E kept saying as Children's Day Holiday... ermmm... the last time we were kids were eons ago lah)

Had contributed Braised Chickent Wing to the potluck lunch.

The rest of the potluck were Fried Bee Hoon, Au-Ta, Roast Chicken, and Salad. Think we finished most of the food except for the very generous portion of Bee Hoon and Salad.

Or if you find it too leh-cheh (troublesome), please do go ahead and throw everything into the pot, bring to boil and simmer for 1.5hr ~ 2hrs. Works too :)

Involved the kids in the cooking by having them count the mushrooms, and to deshell the hard boiled quail eggs. They loved it and told everybody that they helped "cooked".

My pot of braised chicken wings was totally lapped up even before the last guests, including myself had started. So i had only sampled 1 mushroom + 1 taukwa + sauce of my own cooking so that the others can try lah. Seriously, there werent even sauce left at the end...