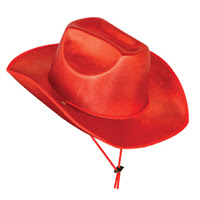 "Noooo... it is a hat for cowboys and cowgirls."

"Noooo... it is for boys and girls who look after cows."

"But there are no cows here!"

had to take some photoes for some application or other, and went to Photo Finish at Jurong Point after lunch at the food court.

"Do you do instant passport-size photo here?"
"Yes"
"It is instant, right?"
"Yes"

Went on a self-improvement spree recently...

why spree you say? self-improvement is good right?

hello... since when have i been an exhibist with a proliferation of pics with me in them? in this blog? LOLz

will blog more about these self improvements soon.

met somebody i havent seen in a couple months and she commented that i looked prettier, i told her it must be the hair...

okay, it was not a party, just a gathering of mostly immediate family and close friends at my sis's.

i had volunteered to order the food, with her preparing the salad, rice and desert.

Thought i made a good call for Amici's Porchetta (Roast Piglet) @ $120 and Seafood Galore @ $144. I called the Holland V branch becos i had the number there and explicitly told them that i wanted to pick up at Tanjong Pagar. I called the next day when HV didnt call back to confirm my order. Confirmed order and confimed pickup location.

left for my trip and came back extremely late 23Dec

woke up breary-eyed 24Dec and E told me that we are going to his sis's for a family gathering!!! that meant tight schedule to go for the gathering at Eunos, pickup the food at TP and still make it to Pasir Ris for my family gathering.

At 5pm, i had a strange gut feeling and called Amici TP. They couldnt find my order and said will call me back. They called back to say that they do have my order but the pick up is at HV. drat! There wasnt enough time to transfer from HV to TP, so would i mind picking up from HV? i mind but do i have a choice? I will have to ask somebody else to collect so I told them that and reconfirmed that since i had already given them my credit card info when placing the order, there was no need to pay when collecting. Confirmed.

I couldnt get to HV in between the 2 gatherings, so i asked a cousin who was going to the gathering to help pick up from HV. They said ok. thank goodness. but little did i know the drama doesnt end there...

We went to the gathering number 1, and quickly to gathering number 2. While on the way, my cousin called to tell me Amici asked her to pay, should she? I called Amici and told them they already confirmed that i had paid, what was going on? They said that while they had my credit card info, they had not entered the billing yet. Not my problem, really, right? Right, my cousin could pick up and go.

When we all arrive at the gathering number 2, there was only 1 Seafood Galore. WHERE IS THE PORCHETTA? I called Amici HV. They had to check and call me back. By then it was 8pm. They called to tell me that yes, i had order the Porchetta and Seafood Galore BUT at the pickup there were too many people and SOMEBODY ELSE took my Porchetta! This is just too ridiculous to be even remotely funny... I told them i was about to scream and they tried service recovery in promising to russel up something and deliver to Pasir Ris, all complimentary and with an additional bottle of wine as apologies.

We had to go out and buy KFC as there really wasnt enough food to go around.

It was 915pm when Amici finally came with a food platter with baked fish, roast beef and roast lamb and some vegetable garnishes and dips, well enough for 15 of us. But no wine. I guess they forgot.

what does an executioner feel when the checkmate was called on his friend, and he has to execute accordingly?

hopefully it was fast and over before the pain hits.

my boss was interviewed by a local TV station, over the new business venture.

thank goodness it was him, and not me.

arrived a little early for my return flight and went for a massage at the airport after check-in. The head, shoulder and foot massage shop was near the D departure gates, and the traditional massage shop was 1 level below.

They were packed and i was adamnant on getting a traditional massage when i am in Thailand. Had to wait for 20min and settle for a 45min massage instead of the 60min massage. It was competent strong though not entirely satisfying for the short duration. It would have to do.

Had some spare THB, and spent all of them at Boots, getting shampoo (buildup remover! yes!) and makeup :D

Labels: to Eat Drink Party, to Travel, to Work

More meetings in HCM regarding the setting up new company and viewing of potential new office locations. Just work.

What was interesting was the food and shopping:

Nice muted modern chinese style deco with LOTS of waiters and waitresses to serve you, not only helping to cook the food for you, but even deboning the pork knuckle that had flavored the soup so that you can get at the meat and the jelly stuff without dirtying your fingers.

We ordered lots of stuff, but i wasnt paying any attention until a dish that looked like drained beans which like they from canned beans baked in tomata source was placed in front of me. Kidney shaped, bean sized, pale orange color. What were they?

"Chicken testicles" they told me, expecting me to squirm (me squirm? hello, me queen of eating all weird stuff, even a balot OK?)

"Wow. How many chickens had to die for this dish?'

"Wait, it should be how many roosters had to die for this dish?"


They were going to a second round of drinking, and i begged off with a couple of colleagues. We wanted to check out the pasar malam / night market. The guy took the car, and i left on a scooter with the local girl.


Riding Pillion on a bike in HCM at night
I had thought it was chaotic previously when being driven in a car, THIS was something else.

No helmet and we were zipping through the traffic at 30km/h (it felt like 70km/h) but with 100 bikes all honking at one thing or another, pedastrains criss-crossing the road every which way, almost no traffic lights and no hard-and-fast traffic rules, and huge cars, in a left-hand drive country, made my heart stopped several times.

And it was belatedly well into my journey that my rider pointed out, "Ms. J, see? No left side mirror. I came out from church last week and it was already broken, and I didnt have a chance to replace it!" silence.... "no worry! i have license!"


Night Market
The night market 2 streets away from New World Hotel is kinda like all other markets such as china town in KL, or women's street in HK, just less crowded with carts/ semi-permanent stores/ selling food, clothings, shoes, costume jewelry, bags and stuff. Everything was bargainable, maybe up to 40% for foreigners and 10% for locals. because they start with a higher price for foreigners... duh!

But i like the culture, it is a relaxed no rush for time bargaining style, they will even point to a stool for you to eat and renegotiate the price should you come to a stalemate after 5-10min. Very unlike say Chiangmai/ Phuket where you get the evil eye for touching merchandise and asking for the price and not buying. No such hostility here. In the end i bought some santarina dresses S$2.40 and christmas hats $0.70 for the kiddies (which my angels wore in the Christmas Eve party) and au-dai $15.00 for the kiddies.


Roadside store
Shopping done, we had a supper at a real road side store, where you sat on knee high plastic stools and plastic tables, and the proprietor was cooking over charcoal in a square metal container with a wire mesh on top.

We had 2x bbq clams in shell, fried clams in shell with garlic, fried diced scalloops with garlic and herbs, and bbq gong-gong, served with a lime-salt-grated ginger-cut chilli-sugar-fish sauce dip (i gotta try replicate the dip at home), and washed down with beer.

It may have been a health risk, but the food was fresh and good. My best meal in HCM, costing just 28000VND which is about S$25 for 3 of us, compared to the US$90 that the 6 of us had at yeebo not counting the wine which were BYO.


Rip off
My young male companion wanted a smoke and went to the street corner seller, where they still sell cigs in a glassed covered wooden drawer, and you can buy just 1 stick.

He was quoted VND 7000 for a pack, being unfamiliar with the currency he pulled out the whole bundle of cash to count them, while the seller asked if he wanted a lighter, he said yes.

Lo and behold the seller plucked out 2 x 20000VND from his hand and told him 23000VND. I thought something was fishy and went to pluck out the money from the seller and asked my companion how much were the cigs, he said 23000VND, me not knowing the market rate for cigs since i dont smoke asked him if that was ok. He was probably dying for a smoke cos he said ok and passed the 40000VND back to the seller, and i made sure he got back his 17000VND.

It was only when puffing the first cig that he realised that at 7000VND (S$6+)for the pack, that meant 16000VND (S$15+)for the small plastic disposable non-refillable lighter... quah quah... and when we checked with the locals, a pack PLUS lighter is probably 6-7000VND. Darn expensive lighter that, i'll advised to frame it up.

Labels: to Eat Drink Party, to Shop Buy, to Travel

Okies, all done. The preparation for the BOD meeting in Japan is DONE!

All that is missing is ME.

i'm not going for the BOD meeting, will be staying in SG to catch up on backlog of work, clear paperwork for various new investments, and strategise action plan.

no freezing in the cold winds of Tokyo... no hectic slave-girl to the BOD... no hard drinking... no missing on zzz... no hangover... no rushing of minutes in the middle of night, ready for the next morning...

then why do i feel so down?

Labels: to Travel, to Work

where did time go?

i wish i could say time flies when you are having fun...
but the truth is, time diffuses like the smoke left from a bomb when you are working flat out and completely concussed from stress adrenaline with eyes teary and back totally hunched up
way too much things had happened over the last 2-3 weeks, so much that it felt like i had lived 2-3 months at warped time in the last 2-3 weeks.
The stuff that happened:
- some were just work (ARGH!) and time management issues (ARGH!!!)
- some were interesting (hair cut at high class place with PEOPLE to hold your hair instead of clips while the stylist cuts)
- some were weird (eating strange stuff in HCM)
- some were annoying (screwed up catered takeaway for Christmas even dinner), and
- some were extremely unpleasant (treachery, treachery) and thus difficult to blog about.
Will let the last 2-3 weeks simmer and blog about them when fully digested.
thanks for checking out my blog and seeing if i am still alive and what's been happening.