My first race and first 10km run for me this year

The nite before
didnt have much rest the nite before (diff bed cos stayed at mom's, 2 sick girls who wanted their pacifier, water, pat-pat to sleep again).

even tho i laid out my gear properly before i slept, i was comtemplating whether to go cos tho i didnt have blocked nose anymore, i was hardly recovered. decided that if i missed my alarm clock at 6am, i will give it a miss.
think i managed to catch 4 hours of sleep in total from 1130pm to 530am

Pre-run
finally got up at 530 to feed the baby milk.
ate a piece of bread and had my own water parade.

getting there and pre-race
bus journey was uneventful tho was pretty conscious of my raceready shorts being too short (read indecent) for morning bus ride. got to Harbourfront bus interchange but had a shock to see so many pp queueing up for the sentosa bus, and so so so many kids and so so so many fit and buff bodies.

paid 10c to go to the loo at the bus station. (good move there cos each queue at the porta-loo were at least 12 deep, saw a man running towards the front of the loo with a look of distress, only to be crestfallen when he saw the queue. dunno what happened to him... )

Panic. will i be able to find the SgRunners group at the visitor carpark? do i have to run with my bag? sms'd cyberkinetic for help and thankfully, managed to meet up with him, and Fd very nicely helped to jaga my bag.

met up with a bunch of pp from SgRunners. all very friendly. good to put a face to a nick. Cyberkinetic gave out tattoos, i didnt want to put 1 on, later siah-sway the group how? :p was persuaded to put it on anyways. 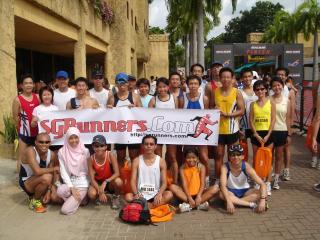 8:15am. it was already so hot, why is the race starting at 8:45am? why not 7:30am or so? logistics prob for transport into sentosa? high tide at the beaches? trail run not bright enough?

took more water, and a can of red bull (even with the adrenaline pumping i was worried about falling asleep on my feet)

saw a girl with full make-up, no kidding, foundation, brow, eye-liners, lipstick even blusher! thot she was just a supporter until i saw her bib. how did allllll that makeup stay on? waterproof stuff? why does she need makeup for a race?

saw another girl with huge loop ear-rings, well at least she did have full makeup, just lipstick, i think.

the run
i wanted to start way way at the back, becos i knew i would bit slow. but got packed in 10m from the front anyway, and made sure that i didnt run too fast first out and had to crawl to the finish line.

not being familiar with the course really floored me, becos i didnt know there were 2 stretches of beach run! when i got through the first one without falling, i thot the worst was over, until i saw the next one. the sand was a killer, my foot sank at least 2 inches into the sand and to extradicate it before the next step. Tried running a little with short steps so that my weight wouldnt go all the way to the foot and into the sand, and that felt better, but it was very tiring. and hot.

saw at least 2 camelbaks as i was dying with thirst, how i hoped that my camelbak is already here and i could have a sip as and when.

it was really hot.

had to take some walking breaks, at the beach (actually this was more like survival break) and at water points, and at least 1 min per 10min at the end.

was running a stretch with 2 very irritating kids from NYP (from their ts) cos 1 was obviously the way better runner who kept running ahead and BACK to pull his friend along, and his friends was so ready to give up but wasnt allowed to. it made me tired just looking at both of them.

the kids (volunteers and road marshalls) shouting "go go go" was all at once irritating ("you should try running") and motivating ("yup, i will") and kinda surreal, cos "hello, you, kid, you are what? 13 years old? dont shout at aunty here, ok?"

i finally saw the last sign that said 9.5km (completed, not to go!), conserved my energy and sprinted (my way) when i saw the clock.

the end
the clock read 1:26:xx and i think my personal timing would probably be 1:25:00 +/- some secs. gotta wait for the personalised cert with timing based on the race chip. not bad since the 1st time 1 ran just 9mths ago when baby was 2 months old, i took 28min to do a 1.86km run aroung my block and was actually feeling "hey~ not tooo bad!" now i know better.

after the run
the adrenaline got me home on dead feet, took off my shoes and sand came pouring out. i didnt even feel them (good job, 2 pairs of socks!)

a quick shower and a small lunch.

looked after cranky baby who had a blocked nose, runny mucus and a raspy cough. passed baton to GGM to help and finally had a nap at 230pm, none too early as a head-splitting crept up on me. probably a combi of lack of sleep and dehydration.

morning after
funny have a rectangular sun un-burnt patch where the sgrunners temp tattoo used to be.

bad didnt check my goodie bag until this morning. no t-shirt, i had wanted to give it to E, something that i earned. called CDANS, and the ladies in charged werent around. :(

--> 1130am: finally caught hold of Stella, who promised to contact me when she can make some arrangements, but no promises that i will get the size that i want. i think that means i WILL get a t-shirt? pretty please?